Head Injury Criterion and the ATB

Presented at the 2004 ATB Users' Conference

Injuries to the head are responsible for 50,000 deaths and nearly one million hospitalizations per year in the . Motor vehicle crashes are responsible for nearly half of these head injuries[1]. Head injury continues to be a leading cause of death and disability.

One of the mathematical models used to complement full scale mechanical testing is the Articulated Total Body (ATB) model[2].  The Articulated Total Body (ATB) Model is a public domain computer program that is used to simulate the dynamic motion of jointed systems of rigid bodies. The ATB includes the ability to calculate for any given simulation the Head Severity Index () and the Head Injury Criteria ().

2.       The skin and other soft tissue covering the skull

o       Most notably the brain, but also including the brain's protective membranes (meninges) and numerous blood vessels (see Figure 1). 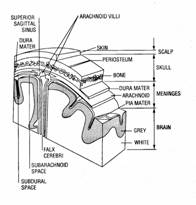 Figure 1 The Scalp, Skull, Meninges and Brain (Figure 2.1 from Reference 3)

Injuries to the skin may be categorized as superficial or deep, and include contusion (bruise), laceration (cut), and abrasion (scrape). Injuries to the skull may break one or more of the bones of the skull in which case the skull is said to have been fractured (broken). Two aspects of a skull fracture are whether it is open or depressed.

Injuries to the brain and associated soft tissue are the result of either head impact or abrupt head movement (e.g., deceleration injury) or some combination of the two.  Injuries may be due to the skull fracturing and being pushed inward (a depressed fracture), or from the brain impacting the interior of the skull, or from internal stressing of the brain (i.e., shear, tension and/or compression). The complexities of the head and brain system are reflected in the rather bewildering array of head injury consequences.

In injury producing events, there are generally 3 collisions which occur:

The human head is a complex system.

Attempting to categorize the possible injuries to the human head is a complex process[4]. Brain injury assessment functions are based on the observed impact responses of cadavers, animals, volunteers, or accident victims. There are limitations of each of these sources of data.

A relationship between the acceleration level and impulse duration with respect to head injury was first presented by a series of six data points that indicated a decreasing tolerable level of acceleration as duration increased. The relationship became known as the Wayne State Tolerance Curve (WSTC), named for the affiliation of the researchers, and has become the foundation upon which most currently accepted indexes of head-injury tolerance are based. The original data only covered a time duration range of 1 to 6 milliseconds and only addressed the production of linear skull fractures in embalmed cadaver heads. The curve was later extended to durations above 6 msec with comparative animal and cadaver impact data and with human volunteer restraint system sled test data.

The WSTC has been criticized on various grounds since its inception: the limited number of data points, possible questionable instrumentation techniques, a lack of documentation regarding the scaling of animal data used in its extension to longer durations, and the uncertainty of definition of the acceleration levels.

From a biomechanical standpoint the main criticism of the is that there have been no direct demonstrations of functional brain damage in an experiment in which biomechanical parameters sufficient to determine a failure mechanism in the tissue were measured (this is also applicable for those advocating a rotational acceleration-induced mechanism of brain injury).  The assumption behind the work is that the translational acceleration produces pressure gradients in the region of the brainstem that result in shear-strain-induced injury. The extension to the human brain remains to be verified.

The WSTC data was plotted by Gadd[5] on log paper and an approx straight line function was developed for the weighted impulse criterion that eventually became known as the Gadd Severity Index (GSI).  In ATB, the program calculates the Head Severity Index () which is the same as the GSI and is defined as the time integration of the function a(t), the acceleration time history[6] :

In response to a study of the analysis of the relationship between the Wayne State Tolerance Curve and the Gadd Severity Index by Versace in 1971[7], a new parameter, the Head Injury Criterion (), was defined by NHTSA in 1972. The is currently used to assess head injury potential in automobile crash test dummies. It is based on the resultant translational acceleration rather than the frontal axis acceleration of the original WSTC. 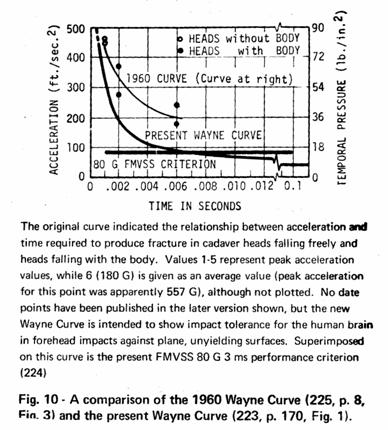 a is a resultant head acceleration

Some questions which arise with respect to are: should be applied to head accelerations which do not result from impact? For a glancing blow to the head for how substantial an impact should be considered? The 36 millisecond interval is meant to encompass the maximum loading for impact waveforms which last longer than 36 milliseconds. Relatively short duration waveforms tend to be associated with head contact whereas longer duration intervals tend to be associated with head deceleration without impact.

The is unique among FMVSS 208 injury criteria in that the limit of 1000 was NOT based on tests where was measured and injuries observed. Head acceleration was measured (as a function of time) and a single parameter (initially , then ) was derived.  The has no specific meaning in terms of injury mechanism.

Recent research by NHTSA related to Improved Injury Criteria[9] have included reviewing the existing regulations which specify a for the 50th percentile male ATD. As of 2000[10], the NHTSA final rule adopts limits which reduce the maximum time for calculating the to 15 milliseconds (15) vs. the prior 36 and revising the limits for different sizes of dummies as shown below in Table S1-1. The head structure for the whole dummy family used in FMVSS 208 is essentially a padded rigid aluminum shell that does not deform as the human skull does deform under loading. The amount and type of deformation in the human skull, for a particular loading, varies significantly with age, and with marked difference between very young children and adults [9].

Another recent report included the proposal of a new head injury criterion entitled the Head Impact Power (HIP).  The HIP was proposed to consider not only kinematics of the head (rigid body motion of the skull) but also the change of kinetic energy of the skull which might relate to the deformation of and injury to the non-rigid brain matter. The Head Impact Power (HIP)[11] is based on the general rate of change of the translational and rotational kinetic energy. The HIP is an extension of previously suggested “Viscous Criterion” first proposed by Lau and Viano in 1986 [12], which states that a certain level or probability of injury will occur to a viscous organ if the product of its compression C and the rate of compression V exceeds some limiting value.

Categorizing the possible injuries to the human head is a complex process. There is currently not any consensus opinion on a standardized procedure or predictor.

Background on ATB and

For research purposes mathematical models have been used to complement full-scale testing of cadavers, animals, volunteers, and used in the development and refinement of ATDs. The ATB has been used to complement full-scale mechanical testing for over 30 years.  When used to interpolate and/or extrapolate full-scale testing, the ATB has been demonstrated to provide a useful tool to assist in the understanding of occupant responses in a variety of environments. In controlled laboratory correlation experiments, wherein the detailed setup, starting conditions and acceleration environment are know beforehand, sensitivity studies can be performed on unknown or immeasurable variables to improve understanding and correlation. The ATB includes the ability to calculate the HIS and for a simulation run. The and HIS calculations provide a crude benchmark for comparison in research and development with full-scale testing and parametric studies.

Every simulation model, particularly occupant simulation models like the ATB, is "an approximation of the physical system it represents and, of necessity, is based on simplifying assumptions concerning the various aspects of the nature and behavior of the real system. For this reason differences between predicted and observed responses of an actual system are to be expected, the disparities depending in part on the adequacy of the assumptions and approximations for the particular operating environment of the system"[13].

Parametric studies of ATB[14] for a limited number of model parameters have been performed in which some parameters were altered from their baseline values to investigate the effects on the occupant kinematics. They demonstrated the sensitivity of various responses of ATB to some parameters. Parameters investigated included: shoulder belt stiffness, lap belt stiffness, knee bolster stiffness, the guide loop location, the guide loop coefficient of friction. It should be noted that for an accident reconstruction, there are few if any known baseline values and therefore any conclusions or results may be subject to variations of 50% or greater (see Figure 4).

Recent studies comparing the responses of the latest Rear Impact Dummy (BioRID I) with volunteer human testing[15] demonstrate improvements in correlation with human responses to that of the Hybrid . However, the responses are still lacking in some areas including producing a human-like retraction motion. Other recent testing comparing the responses of different sized Adult Hybrid Dummies[16] demonstrated that rear impact kinematics are affected by parameters such as backset, head restraint height, seat-head restraint interaction, and anthropometry. The research concluded that rear impact responses are dictated not only by vehicular component characteristics (backset and head restraint) but also by factors such as gender, occupant size and active muscles.

·         The calculation is not an injury predictor; it is a pass/fail baseline measure used for ATDs in full-scale testing.

The human head is a complex system. Attempting to categorize the possible injuries to the human head is a complex process. The ATB has been used to complement full-scale mechanical testing for over 30 years.  When used to interpolate and/or extrapolate full-scale testing, the ATB has been demonstrated to provide a useful tool to assist in the understanding of occupant responses in a variety of environments.

The ATB should be used in forensics and accident reconstruction only as a tool to assist in understanding gross occupant kinematics. Any results or conclusions drawn from an ATB application related to calculations or detailed occupant kinematics involve so many approximations, estimates, and assumptions that they must be recognized as not being compatible with sound engineering practices and principles and, therefore, not scientifically supportable.